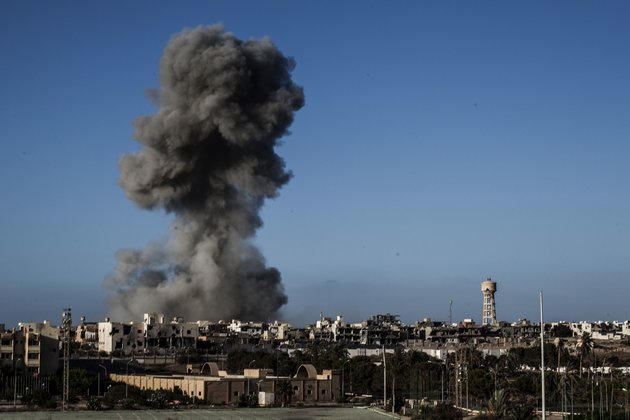 CAIRO - An airstrike that hit a civilian area in a southern neighborhood of the Libyan capital killed at least four children, the country's health ministry said Monday.

Tripoli has been the scene of fighting since April between the self-styled Libyan National Army, led by Gen. Khalifa Hifter, and an array of militias loosely allied with the U.N.-supported but weak government, which holds Tripoli.

It wasn't immediately clear who was behind the Sunday airstrike on the al-Sawani neighborhood, about 30 kilometers, or 18 miles, from the city center, but the Libyan interior ministry blamed the Libyan National Army. The force did not return calls seeking comment.

The health ministry spokesman, Malek Merset, who said a fifth child was wounded in the attack, shared graphic photographs of lifeless bodies and an image of a wounded child, purportedly from the attack.

The fighting for Tripoli has killed hundreds of people and displaced thousands. It has stalled in recent months, with both sides dug in and shelling one another along the city's southern reaches.

Libya descended into chaos after the 2011 civil war that ousted and killed long-time dictator Moammar Gadhafi. It is now split into rival governments - the U.N.-supported government based in Tripoli, which controls some of the country's west, and the east-based government aligned with Hifter that controls the east. Each is backed by militias and armed groups fighting over resources and territory.

In a political development, the Libyan parliament, which is based in the east and affiliated with the east-based government, on Monday called on the U.N. to withdraw its recognition of the Tripoli-based government.

The move appeared prompted by the parliament's outrage over a maritime and security cooperation deal last week between the Tripoli-based government and Turkey.

The parliament has denounced the agreement, signed by Libya's Tripoli-based Prime Minister Fayez al-Sarraj and Turkish President Recep Tayyip Erdogan, as a "flagrant breach" of the country's security and sovereignty. It said the deal grants the Turkish government the right to use Libyan airspace and waters as well as build military bases on Libyan soil.

The parliament speaker, Ogila Saleh, said in a four-page letter to U.N. Secretary-General Antonio Guterres that the agreement amounts to Turkish "occupation of Libyan territory and the violation of its sovereignty." Saleh also said the deal ignores the fact that Turkey has no maritime border with Libya, but that Greece and Cyprus have them.

Greece and Cyprus, along with Egypt, which backs Hifter, have criticized the agreement, calling it a serious breach of international law.

The Turkey-Libya deal has also added tension to an ongoing dispute with Greece, Cyprus and Egypt over oil-and-gas drilling rights in the eastern Mediterranean. Greece plans to raise the issue of the deal at NATO's summit in London, which starts Tuesday.