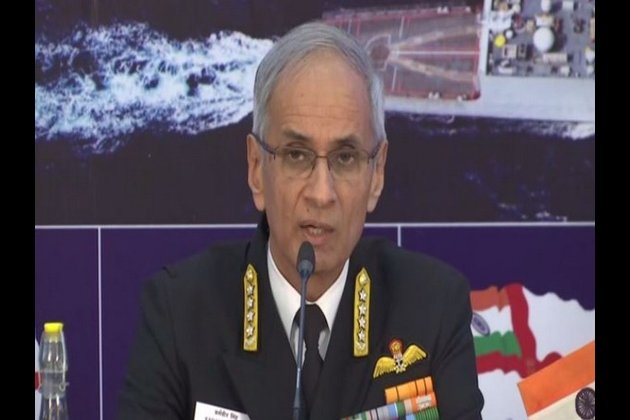 New Delhi [India], Dec 3 (ANI): Navy Chief Admiral Karambir Singh on Tuesday said that the force is fully committed to "Make in India" vision and underlined that since December 2018, close to 88 per cent of Indian Navy's contracts and acceptance of necessity (AoN) by value have been concluded with or accorded to Indian vendors.

"Navy is fully committed to 'Make in India' vision. Since December 2018, close to 88 per cent of our contracts and AoN by value have been concluded with or accorded to Indian vendors," he said while addressing the Navy Day press conference here.

Highlighting that Navy is at the forefront of self-reliance since independence, the Navy Chief said, "Our commitment to this pursuit is seen by the fact that out of 50 ships and submarines currently under construction, 48 are being built in Indian shipyards. These include the aircraft carrier Vikrant, P-15 bravo class destroyers, P-17 alpha class stealth frigates, Offshore Patrol Vehicles and Scorpene Class submarines."The last of P-28 ASW Corvette is scheduled for delivery by next year and the delivery of four P-8I maritime reconnaissance aircraft is scheduled in 2021, informed Admiral Karambir Singh while adding that "we also contracted for 16 ASW shallow watercraft and 36 aircraft which include 12 Dorniers, 16 ALH and 8 Chetak."Speaking briefly about various exercises conducted by Indian Navy, he said, "This year, we exercised our composite combat capability through Navy's largest bi-annual war game, that is the theatre level readiness exercise called TROPEX-19. Also as part of TROPEX, we conducted a pan India coastal defence exercise -- Sea Vigil. Based on its effectiveness, the Ministry of Defence (MoD) has also approved institutionalisation of Sea Vigil on a bi-annual basis.""Indian Navy also participates in numerous regional exercise with friendly foreign countries. From a rather conservative figure of eight exercises in 2015, we are now participating in close to 30 bilateral or multilateral exercises. Maiden bilateral with Bangladesh and Qatar and a trilateral exercise with Singapore and Thailand were also commenced this year. Maiden bilateral exercise with Saudi Arabia is also scheduled early next year," he added.

Speaking about MILAN-2020, the Navy Chief said the event is scheduled to witness the participation of approximately 41 countries. On being asked as to why some of the neighbouring countries, in an apparent reference to China, have not been invited, Navy Chief said, "we have called whom we think are like-minded".

Navy Chief Admiral Karambir Singh evaded question on naval exercises with China based on Modi-Xi Jinping informal summit saying "this is beyond my pay grade."However, the Navy Chief stated that the presence of China in the Indian Ocean Region (IOR) had started in 2008 and "they are growing economy and they have aspirations.""So their presence in IOR is increasing and we are constantly watching it," he said.

"Another milestone for us has been the induction of woman in pilots in MR stream. Three women officers have been selected to undergo pilot training. Sub Lieutenant Shivangi successfully completed her stage two training successfully," he said reminding that several women officers are serving aboard the P-8I plane.

"We are putting our defence and security in place to ensure that threats from terror groups (like Al Qaeda) are thwarted. I want to assure that Navy along with the Coast Guard and other security agencies are ready to face any challenge," he said.

He also ruled out a military angle to QUAD saying, "We are ready to work with like-minded nations to ensure freedom of navigation and rule-based order. QUAD doesn't have a military role at the moment."About the new acquisition, the Navy Chief said, "Letter of Acceptance (LoA) from the US for 24 MH-60R multi-role helicopters is here and the deal is expected to be signed."As for the LCA, Admiral Karambir Singh said, "Navy was the first to support LCA... Defence Research and Development Organisation (DRDO) now wants to give us twin-engine deck-based aircraft and if it meets our timelines and requirements, we will take it." (ANI)