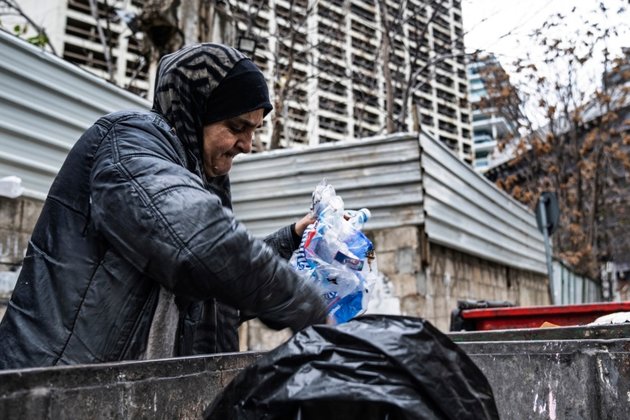 In the dark streets of a Beirut now often without electricity, sometimes the only light that shines is from headlamps worn by scavengers, searching through garbage for scrap to sell.

Even trash has become a commodity fought over in Lebanon, mired in one of the world's worst financial crises in modern history.

With the ranks of scavengers growing among the desperately poor, some tag trash cans with graffiti to mark their territory and beat those who encroach on it. Meanwhile, even better-off families sell their own recyclables because it can get them U.S. dollars rather than the country's collapsing currency.

That's left the poor even poorer and fearful for their futures.

'There's a lot of poor people like me,' said Hoda, a 57-year-old Lebanese mother who has been reduced to scavenging. 'But people don't know it. They know what they see, but not what's hidden.'

The fight for garbage shows the rapid descent of life in Beirut, once known for its entrepreneurial spirit, free-wheeling banking sector and vibrant nightlife. Instead of civil war causing the chaos, the disaster over the past two years was caused by the corruption and mismanagement of the calcified elite that has ruled Lebanon since the end of its 1975-90 conflict.

More than half the population has been plunged into poverty. The Lebanese pound has nose-dived. Banks have drastically limited withdrawals and transfers. Hyperinflation has made daily goods either unaffordable or unavailable, forcing those coming back from abroad to fill their suitcases with everything from baby food to heart medication.

Trash had been a problem even before the crisis, with major protests in past years against neglect by authorities who sometimes allowed garbage to pile up in the streets.

FILE - Boys scavenge in a dumpster for valuables and metal cans that can be resold, in Beirut, Lebanon, June 17, 2021.

The trade once used to be the realm of Syrians who fled their own country's grinding civil war.

'Nowadays, we go to the dump where we sell what we collect, only to find Lebanese people getting out of their cars to sell their recyclables,' said one Syrian, who spoke on condition of anonymity for fear of reprisals. 'Restaurant employees and building janitors also started to sort trash in order to sell it before throwing the rest out.'

Hoda, who gave just her first name for fear of trouble with authorities, turned to scavenging to support her six daughters, ranging from ages nine to 22, and two grandchildren.

She used to sell vegetables on a cart, but police confiscated her wares six different times. She sold tissue boxes, but the currency collapse left her unable to afford them.

Then her son Mohammed asked her to join him in scavenging for garbage. Hoda goes to her spot in Beirut's relatively upscale Hamra neighborhood daily and works sometimes until 2 a.m. gathering plastics, cans and anything else she thinks she can sell or use.

Once a week, Mohammed takes everything they collect to sell to dealers who specialize in the trade. One kilogram (2.2 pounds) of plastic bags goes for 20 U.S. cents, other plastics for 30 cents, while each kilo of aluminium gets $1. While that doesn't sound like much, the collapse of the Lebanese pound means $1 goes much farther.

That access to dollars makes scavenging even more dangerous now. Mohammed said he was beaten up once for crossing into another's scavenger's territory and collecting from a marked dumpster.

'When dollars started to rise, people couldn't afford to eat and they started scavenging, and each started to have their own bin,' Mohammed said. 'If one is standing by a bin and another scavenger comes, a fight will break out.'

'One of the reasons I asked my mother to join me doing this work is hoping that they wouldn't beat me up when they find my mother with me,' he said.

Thugs roaming the streets on motorcycles sometimes target scavengers at the end of day to steal the recyclables they collected.

'They are ready to kill a person for a plastic bag,' Mohammed said.

Recyclables aren't the only items Hoda picks up. In her dark room with no windows and no electricity, Hoda keeps scavenged goods that pile up on the floor. A bucket of white paint to maybe use for her room. A light bulb she hopes to use if she ever gets power.

On a recent day, Hoda's 16-year-old daughter was struggling with her 2-month-old baby's diarrhea and asked for baby diapers, milk, and bottle nipples. Hoda's eyes sunk in sadness and she shook her head.

'My only dream is to have a house for my family and me, where I live like a mother, where I live like a human being.' Hoda said, her face wet with tears. 'I always laugh and joke around with people, but the inside of my heart is black. I don't let them sense that I am upset. I keep it to myself, keep it inside my heart.'

Her most treasured item is a tent she received from protesters during Lebanon's 2019 protests. She hopes she'll be able to use it in future protests against the country's rulers.

'The politicians who rule us deserve to be burned, they are the reason why we are here,' Hoda said. 'They eat with spoons of gold while we search for a piece of bread to eat from the floor.'